Eagles’ Doug Pederson must ‘unclutter’ Carson Wentz’s mind, and his own – NFL Nation


Philadelphia Eagles coach Doug Pederson thinks he has found a way to get quarterback Carson Wentz out of his funk, one that has the team sitting at 0-2-1.

To “unclutter” his QB’s mind, Pederson signaled he will simplify the game plan so Wentz, who has been one of the worst quarterbacks in the NFL statistically through three games, has less to wade through pre-snap. The Eagles will also run more up-tempo offense as part of a greater effort to get Wentz to play quicker and more freely by leaning on methods that “have been successful in the past.”

But, Pederson needs to apply that same back-to-basics logic when it comes to his own performance, too. 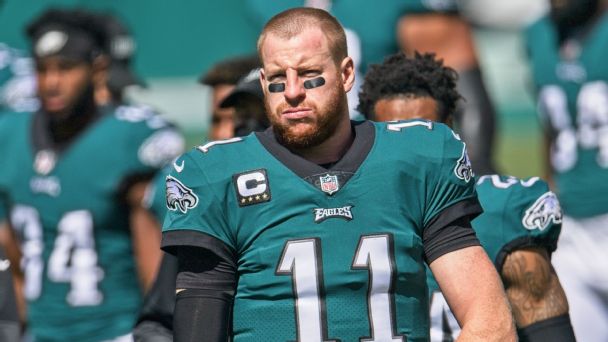 He has strayed off course and away from some of his guiding tenets early in the season. That fact was crystallized late in overtime against the Cincinnati Bengals Sunday when he elected to punt on fourth-and-12 from the opponent’s 46-yard line with 19 seconds remaining, settling for a 23-23 tie rather than giving his offense a chance to go for the win.

There was confusion between plays, as the Eagles’ punt team ran on the field, then started running off before a delay of game was called. If that wasn’t proof enough Pederson wasn’t sold on the decision, his postgame comments hinted at immediate regret, which he confirmed Monday morning.

“Looking back, you probably put it in your quarterback’s hands to win the game,” he said.

How did we get here? How does the same coach who dialed up the Philly Special in Super Bowl LII against the New England Patriots — a coach who has finished either first or second in fourth-down attempts every season since becoming Philadelphia’s leader — wave a white flag in a regular-season game against the stinkin’ Bengals (0-2-1)?

One could point to the situation or a lack of confidence in Wentz and the Eagles’ offense to get the job done, but however it is framed, the move by Pederson remains out of character. And Pederson, more generally, just hasn’t seemed himself.

It’s likely one of the coach’s greatest strengths — the ability to put ego aside in the name of collaboration — is working against him. There were a lot of cooks added to the kitchen this offseason as Eagles owner Jeffrey Lurie looked to spice up an offense that had become too plodding and predictable. The front office influenced Pederson to part with offensive coordinator Mike Groh and receivers coach Carson Walch. A number of newcomers were added, including senior offensive assistant Rich Scangarello, pass game analyst Andrew Breiner and senior offensive consultant Marty Mornhinweg. Quarterbacks coach Press Taylor got a title bump to pass game coordinator and took over many of Groh’s responsibilities.

Pederson was at his best when he had former offensive coordinator Frank Reich as the primary voice in his ear. The coaches who have come on board in Philly all have solid reputations, but when you have that many people speaking, it’s a lot of opinions to sift through and fuse together, with an increased chance of being pulled in multiple directions.

Not to mention the opinions of Wentz, who has had a growing influence over how this offense is shaped. A lot of that is for good reason: Wentz has a bright football mind by all accounts, he has gained experience, and you naturally want your quarterback to be comfortable with the plays he is running.

But it feels like Pederson has let things float a little too far away from him. The offense needs to be tailored to the QB and built out to fend off predictability, yes, but it also needs a core identity, and the Eagles’ identity is very hard to detect at the moment.

Pederson is the only coach in the history of this franchise to lead the Eagles to a Super Bowl title. And yet there has been no whiff of a power grab. He continues to foster collaboration and allow others to put their fingerprints on things, even when those hands are arguably overreaching. That tactic has generally served this franchise well.

There is also a point where some pushback is needed to preserve what has been built and to get all boats pointed in the same direction. That time has arrived for Pederson. If that means reducing Wentz’s creative control and coaching him tougher, so be it. If that means identifying the voices he trusts and tuning out the ones that don’t sync up, fine.

The time is now to reestablish his reputation as a “freakin’ phenomenal playcaller” and reassert himself as the league’s gutsiest coach — the guy who would scoff at the notion of punting for a tie.

All of that is going to happen only if he reclaims the space he has rightfully earned.