COSTA MESA, Calif. — The Los Angeles Chargers’ turnovers in Sunday’s loss to the Carolina Panthers weren’t as bad the New York Jets’ butt fumble or Malcolm Butler’s pick of Russell Wilson in the end zone in the final seconds of Super Bowl XLIX, but they were turnovers just the same. And there are a few things worse in football than losing a turnover — a loss, an injury, bad morale.

But losing a turnover can lead to each of those “worse” things. And three turnovers (technically four when counting the unsuccessful, game-ending, hook-and-ladder lateral to Austin Ekeler) … well, there isn’t much you can do to rectify them — especially if you don’t take away the ball yourself.

“You cannot win in this league when you turn the ball over three times,” Chargers coach Anthony Lynn said after Sunday’s turnover-filled performance. “And that’s on me. I gotta do a better job, coaches gotta do a better job putting this team in position to win and eliminating the stupid and the turnovers.” 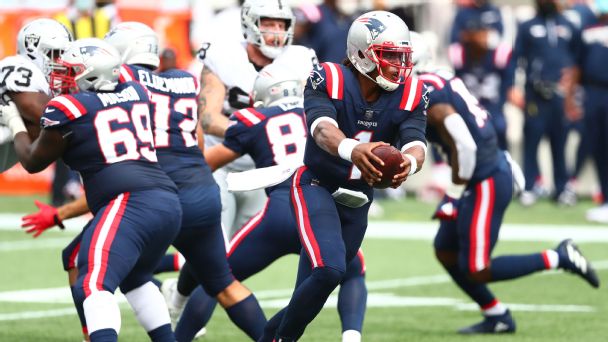 • Pats, Cam ready for the Chiefs
• Ravens haunted by Chiefs all season
• What’s wrong with the Cowboys’ D?
• Rams sign their stars, now what?
• Packers playing like 2011, bad D

Was he just falling on his sword by taking the blame, or is there something to that?

“I have got to do a better job of teaching this team how to win because in this league you give yourself about a 10 percent chance of winning when you turn it over three times and you don’t take any of them away,” Lynn added.

So what do you do?

“We may have to get a little more aggressive with our (defensive) calls,” Lynn said. “But our players also have to be a little more aware of when they can get those turnovers.”

That’s a solution most coaches point to, but saying it and making it understood are two different things. Unless a defense is committed to going after a ball, the lessons aren’t going to turn into results.

Coaches will tell you a mere deflection or disruption is not enough. A safety or a linebacker has to go after the ball, get a head or hand on it and will it out of the ball carrier or pass-catcher’s hands. It’s not easy, but it is effective. But cornerback Casey Hayward Jr. says he’s not concerned, even though the Chargers haven’t forced a turnover since their season-opening win at Cincinnati.

“It’s only been three games. They’ll come,” Hayward said. “If we don’t go and chase them. We’ve held really good offenses down in points and yards, the turnovers will come.”

In the meantime, the Chargers need to prevent giving away the ball.

Rookie quarterback Justin Herbert, starting in his second NFL game, knew the Panthers would likely bring pressure. He knew that pressure was real when he threw an interception to Panthers cornerback Donte Jackson, who returned it 66 yards to the Chargers’ 8-yard line late in the second quarter to set up a half-ending field goal.

“Not throwing it would have been the smartest decision, but also hitting the check down,” said Herbert, who went 35-of-49 for 330 yards and a touchdown pass to go with the interception and lost fumble. “The corner sat on it. That’s one of those plays we talked about during the week. The corner made a good play on it and next time I will just check the ball down.”

The first-half fumble led to Carolina’s second field goal, although it initially looked like an incomplete pass.

“I thought I threw it, turned out it was a fumble,” Herbert said. “It’s unfortunate I couldn’t get the ball out earlier and that’s something I’ll work on as well.”

And there was the final drive, one which Herbert nearly drove the Chargers from their own 1-yard line to the game-winning touchdown. He threw six straight passes to lead the Chargers to the Carolina 23 with 13 seconds left. He then tossed a pass to Keenan Allen, who looked to lateral to a crossing Ekeler, who wasn’t able to handle the pitch. Turnover number four, but who’s counting?

Still, Hayward wasn’t buying in to blaming the rookie quarterback, “He’s a young quarterback, we’ve got to help him out a little bit more with turnovers.”

“Every [lost] turnover was a big swing for us,” Lynn said. “I thought we were going to score on all those drives.”